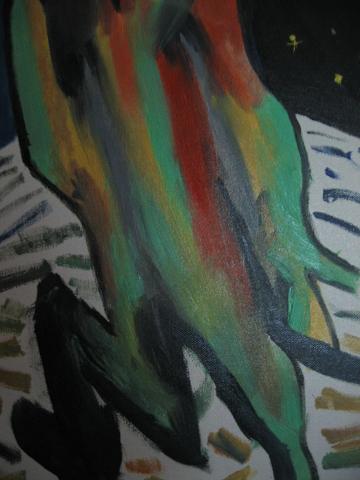 Felice Felice, Peter Delpeut, Nederland, 4:
Beatiful movie about photographer felice, looking for his old love in Japan, whom he left because he did not know for sure that she did love him. Road movie but completely recorded in an Amsterdam studio.

The sweet hereafter, atom egoyan, Canada, 4:
In a village a school bus accident takes place and 14 children die. A lawyer tries to convince people to start a lawsuit, hich causes a lo uf unrest among the villagers. He does not succeed at the end, as a small girl finds out his real intentions. He himself is to pity for his daughter, a drug addict.

The Blackout, Abel Ferrera, US, 4:
Movie star tries to escape from alcohol and drugs, but does not succeed. At the end, after being sober for over a year, he discovers that during his last blackout he killed Annie, a waitress. Although his wife returns to Miami to save him, he commits suicide in the end. Great movie, with much hidden tension, although not much appreciated by the audience.

Riget 2, (The Kingdom), Lars von Trier, Denemarken, 5:
Riget, the danish state hospital is still haunted. Stig, the Swedish doctor, Krog - the assistant, Frau Drusse and all the others are also present in the second movie of 5 hours, which, as last time, is still to be continued. The Minister of Health is almost killed as Stig takes away electric power from the artificial respiration to feed his electric car (as the Volvo is in the garage). Many, many jokes and scary situations (stamps, pinguins, erotica as hobby, the alarm in the archives,

Deconstructing Harry, Woody Allen, US, 4.
Although sometimes a bit out of focus, this movie can be considered as one of his best. Harry arrives at his university, from which he was expelled, to be honoured, but with a prostitute, dead body and a kidnapped son in his car.

Fools, Ramadan Suleman, South Africa, 2,
Too idealistic movie about relations between black and white in 1989 South Africa. The short movie before the main screening, The Foreigners, gave a better impression of the country and the penetration of illegal foreigners from Mozambique and Zambia.

Men with guns, John Sayles, US, 4.
Great movie about a doctor trying to find his students back whom he sent to villages in the mountains in a Central American country, He discovers that they were alle killed by army and guerillas, because why would an educated man come to the country-side except for being involved in the political struggle. in the village near to heaven "Cerca de ciel" he finaly dies himself. But only after a very well filmed road movie with an ex-soldier, an ex-priest (who had to choose between dying or escaping) and a girl.