A man walks alone in the desert. He has no memory, no past, no future. He finds an isolated settlement where the doctor, another exile, a German, makes some calls. Eventually the man's brother comes to take him back home again.

Some 15 years ago, in 1984 or so, I saw the movie Paris, Texas for the first time. It had a large impact on me. I was impressed by the sad story, by Natasja Kinsky and most of all, the beginning of the film. Travis standing somewhere in a desert in Texas with this fantastic guitar music by Ry Cooder. And of course, the railway he is walking along when Wald, his brother shows him that it is really not leading anywhere. In the rest of the movie, Paris, Texas is not visited. Travis joins his brother to his family in Los Angeles (where he meets his little son Hunter again). When he is going to his ex, she appears to be working in a kind of striptease club in Houston.

However, this last thing I forgot, so when I was on a business trip in Houston, Texas and also had to visit Dallas, I decided that it would be a great thing to visit Paris as well. After all, it was a detour of only some six hours which is not much according to Texan standards. If I would have remembered that the movie did not take place in Paris, but rather in Houston, I would perhaps not have taken the trouble....

Anyhow, I left on a Sunday morning on 21 June 1999 on 7.30 am in my rented blue Dodge Grande Marquis, a large and comfortable American car. It was still early, but there were already enough cars on the highways surrounding Houston, just like in the movie. Most interesting town on the road to Paris was Nacogdoches, which claims to be the first city in Texas, established in 1830. Another city was named Moscow, so that I can claim to have driven from Moscow to Paris in just 4 hours.

Eastern Texas is an extremely conservative area where you can find more Baptist churches than Walmarts. Probably, there are enough funds, as most churches are new, large and with nice architecture. Still, many shops and restaurants are open, even on Sunday morning in this area.

I was also told to take good care at the speed limits while driving. If stopped by a highway patrol, I should put my hands on the steering wheel, not make any suspect movement and end every sentence with "Sir". But as roads were ok and no police was fast enough to stop me. I arrived at the borders of Paris by 1.30 pm. It was desolate, like in the movie.

The town itself, with some 25000 inhabitants, was also deserted. Travis could have walked here without meeting anybody. I drove around, it was too hot outside to walk and made pictures, leaving the car for just seconds.

Later in the afternoon it became a bit busier, especially in the outskirts where shops were opened. At 6pm I decided that I made enough pictures and as not a single postcard was available of this little visited city, I left for Dallas. The last thing I did was too buy the local newspaper, The Paris News, as a souvenir. The parade of the 4th of July looked promising, but I guess I will never see Paris again, just like Travis and Jane will never be together again. 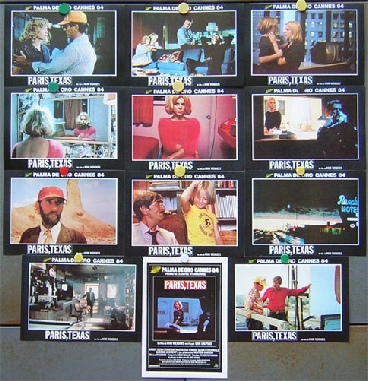