One of the most impressing football stadiums in the world is without any doubt Nou Camp in Barcelona. It has always been one of my dreams to play there. I had my chance. I once played against the top youth team of Ajax Amsterdam, perhaps with van Basten and Rijkaard and therefore loosing with 13-0 (the first goal was mine, but it was an own goal).

Hence being a spectator was the only alternative. The Dutch contents of Barça made the team even more interesting. After Cruyff, Neeskens and Koeman, nowadays Kluivert, Reiziger, Hesp, Zenden and Cocu are playing in the Catalan capital, with also a Dutch trainer: Louis van Gaal.

After last season when Barça became champion of the primera division in Spain, the results this year turned out to be much worse. In the Champions League the team did not succeed to reach the quarter finals after disastrous results against Bayern Munchen and spectacular draws against Manchester United. In the national league things were also not going to prosperous with three subsequent losses. However, we quickly learned after arriving on our first day in Barcelona that they had to play against the very unknown Villarreal from Compostella. That could be no problem for the team and would be a good opportunity to see the real Barça making its first steps towards recovery and the next title.

Full of good spirits, among others Sangria, we therefore quickly decided that we should have the tickets. We tried the modern ticket machine, which you can find in many places in the city, but it told us the game was sold out. Not surprising as there are 100.000 season tickets and therefore only 20000 free places. Our next step was to go to the tourist information to ask about any further possibilities except for convincing the guards that we were definitely family from van Gaal. After making a phone call they told us that if we would go as soon as possible to the stadium we would have a chance of obtaining the ticket.

We rushed to the stadium and arrived in time, just 4 hours before the match would start. The ticket office would only open half an hour later so we spent the time buying Barça shawls and spyglasses. Finally we got our entrada ticket for Estadi Barcelona for 3600 pts. We decided to go for a bottle of so called "rose" and a meal, enjoying the songs of the cheerfully yellow dressed Villarreal fans who, just like us arrived somewhat early. After the meal we could quietly walk together to the stadium. No fights, no aggression, many woman, even whole families; just people enjoying themselves.

The stadium was beautiful. Entering through the gates we could see the blinking green field illuminated by huge lamps. We were sitting on the second ring of the stadium behind the goals, but the sight was almost perfect. Far above us, in the middle of the field on the left, few compartments were filled with the yellow Villarreal fans. They were already singing and making the wave. Their funny yellow balloons gave already a lively impression to the stadium, which for the rest was still empty, although it was just one hour before the match would start. We now understood why we saw so few Barça fans on our way to the stadium.

The warming-up started and more and more people entered the stadium. The players did not do too much and after 20 minutes they returned to the changing-room. We could use a warming-up ourselves, because after a sunny day it now suddenly became colder. Should we consider this as a sign for the upcoming match?

The players returned and without much ado the kick-off took place. Barça turned out to be much stronger and it was a pleasure to see how players such as Rivaldo,  Figo, Kluivert and Cocu were circulating the ball to each other. In just 5 minutes they had already a couple of corners.

But things turned out to be different. The first time Villarreal appeared on the half of Barça, they scored a fabulous goal. And as this happened again, 15 minutes later, the crowd started whistling and the first white handkerchiefs were there. Kluivert got a perfect opportunity to score but even he did not manage to find the goal. And so the first half ended in a 0-2 for Villarreal.

The second half was breath taking. First Villarreal scored 0-3 and the whole stadium exploded. Many of 60.000 spectators showed their white handkerchiefs and this picture had later been sent to television screens in the whole world. The yellow Villarreal fans did not believe what they saw and were singing even louder than before the game. Barça started attacking furiously and could easily have scored three goals instead of the single goal at the end of the game. But the crowd did not believe in the miracle any longer and after the game, when the Barça players disappeared as soon as they could, the Villarreal players received a warm applause. They won 1 to 3 in Nou Camp.

The headlines of the newspapers next day were very critical. This was the worst position in the primera division since 1969 and the position of van Gaal was seriously in danger. "Not one more day", one newspaper concluded. It was decided by the council of Barça that he would get one more week to restore confidence, but even when he would win the next game (which indeed happened) prospects were very weak.

And what about us? During the rest of our stay in Barcelona we have told everybody that we were Germans.... 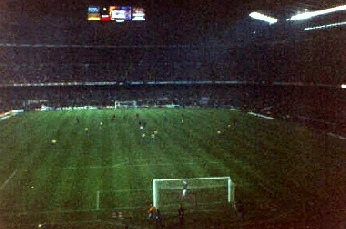 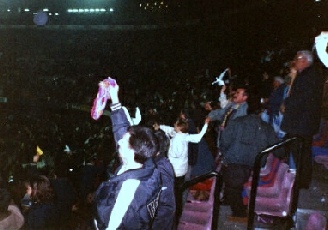